i ate a power bar on the way home from school to make sure i had plenty of energy to exercise, i even made sure it was a performance power bar.

it gave me so much power that i ran directly upstairs to my bed in hopes of getting a little sleep before having to pick up the kids.

that is one powerful bar.

on a different note, queen brought home yet another insightful book from the library.

she is now the jane goodall of mice.

while walking he found a cluster of deer, took aim, and shot.

his hand was steady as he scoped his shot before opening fire.

sadly, although his aim was true and the rapid fire shooting action was accurately depicted with sound, the deer just stood (one was laying down) and stared back at him.

they don’t make finger guns like they used to.

the tooth fairy forgot, once again, to take the teeth.

“i am running upstairs right now to see what the tooth fairy left!” said one child.

“bird, there is something you should know” i said while reaching for the change jar.

“I KNEW IT!!!” came the yell from the bathroom which was currently occupied by the other tooth fairy hopeful recipient.

“for today…..” i started saying equally shocked that she was shocked. “you see, she left a note with dad saying she is sorry for being so forgetful lately and for us to please help her out.”

“really?” was her doubtful question.

“that’s true.”she said calming down. “let’s call dad right now so he can tell me what the note said.”

“ok, i will dial him up right now.” and this is how the phone conversation went.

“hi sweet, bird is right here and i told her about the note the tooth fairy wrote you saying what to give them for each tooth, you got it right?” i asked never breaking eye contact with bird.

i fell in love all over again.

disaster averted, $4 spent on dead teeth, and the tooth fairy still firmly intact for the bird, we continued with our morning.

that is until bird said “i can’t wait to see the note she wrote!” as she walked out the door.

i have come to the realization that no matter how many times you say a cat is a dog it just is not.

you can hire experts to analyze this cat to make it a dog.

it still is not.

you can hire private investigators to follow this cat to see if it will secretly act like a dog…but it won’t.

it is still a cat. you can file reports, petitions, and involve any other agency to investigate, but sadly, it will still be a cat.

eventually, the one seeking to convince the world that the cat is a dog will be deemed a little……how shall we say this?

and like cats, this cat does not really care what the rest of the crazy seeking- to- prove- me a- dog individuals….. unless you bring cookies, then i am all over that.

nah, most people who read my stuff know what is going on, but if not, let me just give you a little over-view.

these all are things that i have been accused of over the past 12 years.

these are things a lot of people believe, people tend to believe the worst in others, it is just so much juicier.

but as i mentioned before, a cat is still just a cat no matter how many times you scream dog.

and it’s a rockin’ cat too.

“i have athlete’s foot!” the little neighbor girl informed me while taking her shoes off to play at our house. “and the doctor said it is a bad case, wanna see?”

no, no i did not want to see and all i could see at the moment was her bare feet running across our floor.

side note to the gentle reader: i was going to put in a picture of athlete’s foot but got physically sick to my stomach looking at the options.

watching her spread her stinky feet all over my house made me remember the neighbor girl who invited lice to our house, she left but the lice stayed.

again, i was going to put a picture of lice up but just seeing them brought on PTSD.

then i thought about the neighbors boys i told to go home because we were having dinner. at the end of dinner, these same neighbor boys i thought had gone home, came upstairs from the basement where they had been hiding.

“do you have any left? we sure are hungry.” they informed me.

i was so shocked that i fed them.

then that reminded me of the time that i came upstairs to see a strange little girl in my house.

“oh, that is my friend from school, i invited her over to your house to play today.” the neighbor girl told me.

she did not seem to realized that this was not her house to invite people to.

she was genuinely shocked when i informed her of this.

then that reminded me of the neighbor boy i told that he could not play when he knocked on our door to ask.

after shutting the door i went about my business only to look at the window a while later to see him still staring in at me, i told him to go home.

i closed the curtains on him.

i looked to see his silhouette through the curtains and realized this kids has a real career ahead of him in voyeurism.

as soon as i master this little trick, i think i can control the revolving door policy at our house.

until then i am finding neighbors without communicable diseases.

i do not like hot drinks, in fact i rarely ever have any.

yet when i see a coffee cup, i can’t help but buy them.

the hubby says that’s okay, my urge to buy them is inexpensive, mostly $1 spent.

i did not realize the collection, or really pay attention to it, until this morning.

as you can see, i also have an unexplainable urge to not have any matching sets of glasses.

they do make excellent cereal bowls.

quite the brouhaha over proxy baptism lately….again.

for those who don’t know, mormons believe that everything can be saved by being a mormon, especially once dead.

that’s right, if we can’t get them alive, we get them dead.

my first and foremost question is this: if you don’t believe in mormonism to begin with, what makes you think that just because it is suddenly written in some records that an overly zealous, genealogy seeking,  baptizing mormon has decided Gandhi needed saving by proxy baptism, that Gandhi is suddenly mormon?

i am certain Gandhi has done very well by himself without the aid of any help of baptism after death. and the fact of the matter is, so do the actual leaders of the mormon church.

let’s leave the zealots out of it.

in fact, if i was suddenly made an islamic, southern baptist, hindu, jewish, amish settler after death by proxy conversion, i am pretty sure my family would still be content in knowing that even with all those kind religious people looking out for the welfare of my soul…..i am still in a lot of trouble.

my point is this, if you don’t believe in the religion of mormonism, why worry about the practices that are ‘by proxy’ and really do not carry any weight in the conversion or changing of anyone’s religion after they are dead.

death. it’s pretty final. i don’t think your relatives are going to come back and ask why you allowed them to become a mormon in heaven. and if your ancestors believed in reincarnation, they may be very shocked to come back as a mormon missionary due to the pesky nature of the above mentioned zealot.

if this phenomenon was correct, i think the person who decided it was a good idea to baptize this guy after he died should be pretty concerned.

he does not strike me as the missionary type.

speaking of learning unexpected things and deciding whether to believe them or not, my daughter made a shocking discovery at mcdonald’s (i hate this place and rarely take my kids there)

she discovered a big mac, no that was not shocking, for her it was life-altering. 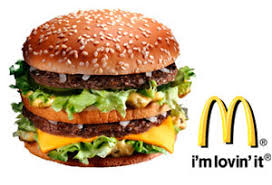 “this is made with 100% real beef!!!” she exclaimed after reading the box.

“yeah, all hamburger is real beef.” i pointed out.

“really?” she was genuinely shocked.

9.9 yrs of thinking i was teaching my daughter all things important in life went down the loo.

later that night she asked her sister if she knew hamburger was beef, her sister was equally as shocked.

that one did not surprise me too much, she thinks all meat comes from chicken.